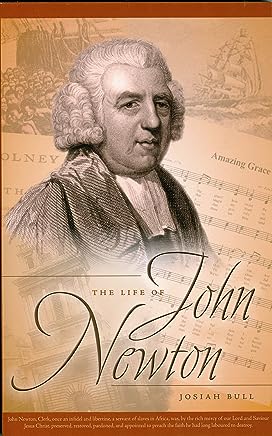 Near the end of Josiah Bull’s biography of John Newton, there’s a quote by Newton that is somewhat critical of the great American theologian, Jonathan Edwards. Here it is:

“Mr. Edwards was an excellent man, but some of his writings are too metaphysical, and particularly that book [The Freedom of the Will].  If I understand it, I think it rather establishes fatalism and necessity than Calvinism in the sober sense.  I could object likewise to his book on Original Sin, though there are many excellent things in it” (p. 328).

These statements really made me want to hear more from Newton on Edwards, since I too am somewhat critical of Edwards’ theology.

Reading through Wise Counsel: John Newton’s Letters to John Ryland Jr., I did find more.  In a letter Newton wrote to Ryland in 1778, he criticized New England theology.  Though Newton wasn’t writing of Edwards specifically, he was writing generally of the American divines in the late 1700s.  I realize this post is a bit longer than normal, but I didn’t want to leave any part of this quote out.  Here it is.

“Most of the New England divines I have met with have in my judgment one common fault: they abound with distinctions and refinements in experimental matters, which are suited to cast down those whom the Lord would have comforted. And in their long account of what they call a preparatory work, they include and thereby depreciate some real and abiding effects of true grace. They require such an absolute submission to the righteousness and sovereignty of God, before they will allow a person to be a believer, as I apprehend is seldom the attainment of a babe in Christ.  I think if Mr. Stoddard had been at Philippi, and the jailer had sprung trembling in to him (instead of Paul and Silas) with the same question he would have afforded him but cold comfort, and would have made him wait a few weeks or months to see how the preparatory work went on before he would have encouraged him to believe in Jesus.

“Some of the good advice he gives to those under temptation, leads me to think, he had not sailed much in those deep waters himself.  In short, it [Stoddard’s The Way to Know Sincerity] is a book which, notwithstanding the many important things it contains, I should not put into the hands of some of my poor people.”

“We say such a building is a house, not only when it is tiled, painted and furnished, but while the walls are yet unfinished, while it is encumbered with rubbish and surrounded with scaffolds, which though not a part of the edifice (but are designed in time to be removed) are helpful for carrying it on.  We speak of a field of wheat not only in harvest but in spring, and say ‘It is day,’ when the light is gradually increasing, though the sun be not risen.  I doubt much if those desires and workings in an awakened mind which are mixed with great legality and mistakes are the real effects of the Holy Spirit no less than the fruits of joy and peace in believing which he produces in due time, and therefore ought not hastily to be cast away in the lump, as mere strivings of corrupt nature.  It is true there are unsound convictions, and impressions which are not abiding, but the Lord’s labourers should weed with a gentle and cautious hand, lest in their attempts to pull up the tares, they should pluck up the wheat also.”

“It would be well if both preachers and people would keep more closely to what the Scripture teaches of the nature, marks and growth of a work of grace instead of following each other in a track (like sheep) confining the Holy Spirit to a system; imposing at first the experience and sentiments of others as a rule to themselves, and afterward dogmatically laying down the path in which they themselves have been led, as absolutely necessary to be trodden by others.

There is a vast variety of the methods by which the Lord brings home souls to himself, in which he considers (though system-preachers do not) the different circumstances, situations, temperament, etc. of different persons. To lay down rules precisely to which all must conform, and to treat all enquiring souls in the same way, is as wrong as it would be in a physician to attempt to cure all his patients who may have the same general disorder (a fever for instance) with one and the same prescription. A skilful man would probably find so many differences in their cases, that he would not treat any two of them exactly alike.

“I hope the Lord has made me willing to learn (if I can) from all, but Nullis in verba jurare [take no one’s word as final] is my motto.  If you read the Scripture and your own heart attentively, you will have greatly the advantage of those who puzzle themselves by too closely copying the rules they find in other books.”

I wholeheartedly agree – and I appreciate Newton’s pastoral tone (go back and notice his illustrations about the house/building, sheep, wheat/tares, and physician).  I’ve tried to read Edwards’ Religious Affections but didn’t appreciate it because it didn’t really lead me to assurance at the foot of the cross.  I know Edwards wrote it for a particular audience at a particular time, but it seemed far too spiritually tedious to me.  For this and other reasons, and for the reasons Newton well noted above, the writings of Edwards are not typically on my recommended reading lists.  And by the way, this discussion also has to do with the judgment of charity (or charitable judgment).  But more on that topic later.

3 Replies to “Newton’s Critique of Edwards”