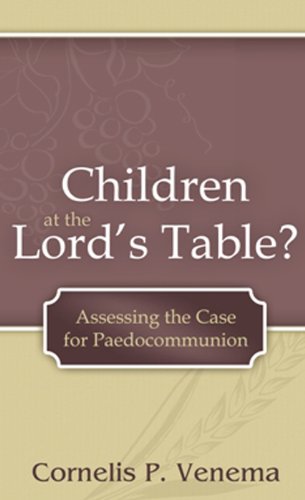 Those who believe that infants and young children should partake in the Lord’s Supper often appeal to the Passover in the Old Testament, which, they say, included the participation of very young children.  This paedocommunion view also argues that not including children in the Lord’s Supper is a bad thing because by doing so we’re excluding them from a covenant meal in which they have the right to share.  There are other arguments for paedocommunion, but these two are important ones.

However, these arguments aren’t very strong.  Cornelis Venema tackles them well in his helpful book, Children at the Lord’s Table.  I’ll summarize part of his response below:

First, any consideration of the precedent of the Old Testament Passover must take into account the important distinction between the first and subsequent celebrations of the Passover.  Whereas the first Passover in Egypt was clearly a household celebration, the stipulations for later celebrations, which were known as the pilgrim Passovers, required only male members of the covenant community to keep the Passover and the other two pilgrim feasts: the Feast of Weeks and the Feast of Booths (Dt. 16:16; Ex. 27:13; 34:23)…. These provisions for the annual celebration of the pilgrim Passover did not expressly prohibit the participation of women and children, but neither did they require, nor did they seem to anticipate, the participation of the women and younger children of the covenant community.

Once it is acknowledged that these stipulations were normative for the annual Feast of the Passover in Israel, the paedocommunionist argument that all of the children in Israel participated in the passover seems rather unlikely.  Moreover, the assumption of the paedocommunion argument – that non-participation in this covenant meal is tantamount to a kind of exclusion from full covenant membership and its privileges – is not valid.  It is gratuitous to assume that enjoyment o the privileges of the covenant was dependent upon all members of the covenant community participating to the same extent in the Feast of the Passover.  Were this assumption correct, one would expect the Old Testament provisions for the Passover to require the participation of all members of the covenant people.

Venema also notes that infants would not be able to eat roast lamb and bitter herbs, nor should it be assumed that they shared in the “cup of blessing” (wine) that was later added to the Passover feast.  Another aspect of the Passover, Venema notes, is the “catechetical exercise.”  That is, the children would ask what this meal means and were given an answer that infants could not understand (Ex. 12:26-27).

There are more parts to this discussion, but I agree with Venema: “Paedocommunionists’ appeal to the alleged participation of children in this Old Testament rite is not persuasive.  The Old Testament simply does not teach what some paedocommunionists allege.”  We also learn from Old Testament practices that just because someone in the covenant community did not partake in every feast, meal, and ceremony, it didn’t mean that person was excluded from the privileges of being in the covenant community.  These two arguments of the paedocommunion position are not strong arguments.

For Venema’s entire discussion, see chapter four of Children at the Lord’s Table.