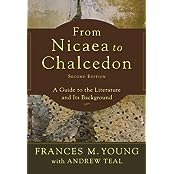 I’ve mentioned this helpful patristics resource here before: From Nicaea to Chalcedon by Frances Young. It’s a great study on some of the church fathers and their teaching (e.g. Athanasius, Basil, Cyril, and so forth). One early church leader Young discusses is Gregory Nazianzen, who is called “Gregory the Theologian.”  Gregory was a defender of the bibilical doctrine of the Trinity, but he also was concerned with positive affirmations of the Christian way of life.  Here’s a paragraph from the introduction to Gregory.

“A study of the doctrinal controversies of the fourth and fifth centuries may leave one with a sense of frustration.  Were the debates really significant?  Were the contenders not hair-splitting in a matter that is beyond human knowledge?  Standing back from the debates, we may be tempted to wonder how so much passion could have been expended on relatively technical issues.  It is when we sense the religious significance of the issues that we begin to appreciate why emotions were roused.”

“Athanasius, as we have seen, was driven by the urgency of his sense of salvation in Christ: Arian simplification just could not contain the depths of that reality.  Gregory was likewise driven by the pressures of his religious consciousness.  For him, the cold technicality of logical argumentation detracted from his sense of the mystery in the divine.  The Arians, he felt, were too rational by half.  An adequate theology had to do justice to his experience of awe and mystery in the universe, in ascetic contemplation, in the liturgy and in scripture.  Gregory knew that human beings can know nothing of God, except what God has chosen to reveal in limited human terms.  So he is often hesitant and plainly aware of the complexity of the problems he is discussing.  He exhorts his congregations to cling to the essentials, and particularly the sure foundation of the cross of Christ.”

2 Replies to “Doctrinal Hair-Splitting and the Early Church (Young)”