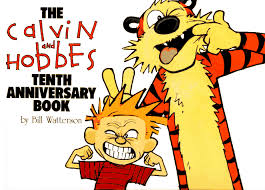 I thoroughly enjoy reading the Calvin and Hobbes comic strip. I love the art, the surprise, the depth, the sarcasm, the humor, and the unromantic philosophical aspect of the strip. (Forget movies and TV, give me a Calvin and Hobbes book any day!) A few weeks back I spent an entire afternoon/evening in an airport and airplane reading (and re-reading) The Calvin & Hobbes 10th Anniversary Book. In this book I found a jewel of an essay by Bill Watterson, the creator/writer of Calvin and Hobbes. The article is titled “Licensing” and it has to do with why Watterson refuses to license the strip and its characters. Reading it, I couldn’t help but notice some parallels between marketing the strip and marketing the Christian faith as is widely done today. I won’t draw out everything here, but I encourage you look for parallels. Here are some reasons Watterson will not license Calvin and Hobbes.

1) “I believe licensing usually cheapens the original creation. When cartoon characters appear on countless products, the public inevitably grows bored and irritated with them, and the appeal and value of the original work are diminished. Nothing dulls the edge of a new and clever cartoon like saturating the market with it.”

2) “Commercial products rarely respect how a comic strip works. A wordy, multiple-panel strip with extended conversation and developed personalities does not condense to a coffee mug illustration without great violation to the strip’s spirit. …When everything fun and magic is turned into something for sale, the strip’s world is diminished.”

3) “Licensing requires a staff of assistants to do the work. The cartoonist must become a factory foreman, delegating responsibilities and overseeing the production of things he does not create. …My strip is a low-tech, one-man operation, and I like it that way. I believe it’s the only way to preserve the craft and keep the strip personal.”

4) “Beyond all this, however, lies a deeper issue: the corruption of a strip’s integrity. All strips are supposed to be entertaining, but some strips have a point of view and a serious purpose behind the jokes. When the cartoonist is trying to talk honestly and seriously about life, then I believe he has a responsibility to think beyond satisfying the market’s every whim and desire. …When a cartoonist licenses his characters, his voice is co-opted by the business concerns of toy makers, television producers, and advertisers. The cartoonist’s job is no longer to be an original thinker; his job is to keep his characters profitable. The characters become ‘celebrities,’ endorsing companies and products, avoiding controversy, and saying whatever someone will pay them to say. At that point, the strip has no soul. With its integrity gone a strip looses its deeper significance.”

The entire excellent article can be found on pages 10-12 of Bill Watterson, The Calvin and Hobbes Tenth Anniversary Book (New York: Scholastic Inc., 1995).

1 thought on “Calvin & Hobbes, Marketing, and the Christian Faith”