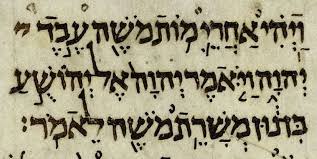 [UPDATE: I’ve made some edits to this post in light of some good feedback in the comment box.  Of note was the comment of Wedas who reminded me that the English word “since” is not just causal but can also be used temporally.  I think I might have titled the post differently, maybe something like “Does אחרי mean מאז?  Prepositions or adverbs in Gen 41:39.”  All this just cements in my mind the importance and value of wrestling with grammar!]

Then Pharaoh said to Joseph, “Since God has shown you all this, there is none so discerning and wise as you are.” (Gen 41:39 ESV)

In doing my translational work for a sermon in two weeks, I was a bit thrown by the way the ESV translated Gen 41:39. Since אחר and אחרי generally mean “after” or “behind,” I didn’t know what to make of the ESV’s rendering of the lexeme as “since.” What should we make of this translation? Does it make any difference?

The LXX, as written above, translates the word as ἐπειδὴ.  This can be translated either as “after” or “since” so it is not entirely clear whether the LXX is interpreting the term as Hebrew as temporal or causal.  (Incidentally, the Tov LXX/MT alignment project notes that this is the only place the LXX renders אחרי with ἐπειδὴ, although the cognate ἐπεί is used two times for אחרי.  It should be noted, however, that ἐπεί can also have a temporal meaning, so the opacity remains.)

Targum Onkelos translates אחרי with די (“because”), so it seems that at least one ancient interpreter is reading this causally. And yet it is also possible that Onkelos simply didn’t care for the word “after.” After all, it feels a bit more awkward:

“And Pharaoh said to Joseph, ‘After God made all of this known to you, there is none discerning and wise like you.'”

“After” just doesn’t flow as nicely as “since” or “because.” But the MT does say אחרי and both Targum Pseudo Jonathan and Targum Neophyti translate with בתר, which means, according to Marcus Jastrow, “after, behind.” (Dictionary of the Targumim, the Talmud Babli and Yerushalmi, and the Midrashic Literature, s.v., בתר, באתר). HALOT and Holladay also translate אחרי solely as “after.”

Victor Hamilton (NICOT) translates Gen 41:39 with “because,” but footnotes it, citing an article by W.J.P Boyd, “Notes on the Secondary Meanings of אחר,” JTS 12 (1961), which I am unable to obtain as of the writing of this post. The statistic Hamilton gleans from Boyd is that only 8 of the 71 occurrences of אחר have a causal force. (See Hamilton, pg. 501, n.3.) I decided to take a look at the passages to see what might be driving this translational decision. Here are the passages he cites, not reprinting passage currently under consideration, with my comments.

ESV translates with a causal meaning, but אחרי may still read fine with a temporal meaning. If not pressed too literalistically, the aged Jacob could be telling Joseph that after seeing his face, he is at peace and can now face death. (Cf. a similar type-scene in Luke 2:29.)

O Lord, what can I say, when Israel has turned their backs before their enemies!
בי אדני מה אמר אחרי אשר הפך ישראל ערף לפני איביו

Since אחרי is in collocation with אשר, I am skeptical of assigning a causal meaning to אחרי using this verse as support. After all, the causal meaning might be coming from the אשר half of the collocation. (Note that the ESV has even stayed with a temporal translation, “when,” simply changing the timing of the action. Incidentally, “since” does sound like a better translation here.)

So she said to him, “My father, you have given your word to the LORD; do to me as you have said, since the LORD has avenged you of your enemies, the sons of Ammon.”
ותאמר אליו אבי פציתה את פיך אל יהוה עשה לי כאשר יצא מפיך אחרי אשר עשה לך יהוה נקמות מאיביך מבני עמון

And the man, the master of the house, went out to them and said to them, “No, my brothers, do not act so wickedly; since this man has come into my house, do not do this vile thing.
ויצא אליהם האיש בעל הבית ויאמר אלהם אל אחי אל תרעו נא אחרי אשר בא האיש הזה אל ביתי‪‬ אל תעשו את הנבלה הזאת

So I stood beside him and killed him, because I was sure that he could not live after he had fallen. And I took the crown that was on his head and the armlet that was on his arm, and I have brought them here to my lord.”
ואעמד עליו ואמתתהו כי ידעתי כי לא יחיה אחרי נפלו ואקח הנזר אשר על ראשו ואצעדה אשר על זרעו ואביאם אל אדני הנה

ESV translates with “after” (i.e., temporal). I am not sure how this could be rendered causally.

Like 2 Sam 1:10 above, I’m not sure how this can be rendered causally.

I am not sure translating Gen 41:39 causally is either warranted or necessary. The passages cited in favor of such a move do not seem to require a causal meaning, though Gen 46:30 could be one such example. Instead, retaining a temporal translation seems to add a neat nuance. Again, my translation from above:

“And Pharaoh said to Joseph, ‘After God made all of this known to you, there is none discerning and wise like you.'”