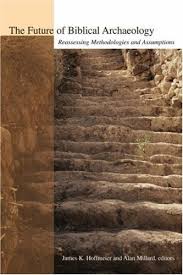 In The Future of Biblical Archaeology: Reassessing Methodologies and Assumptions, David Merling has an excellent methodological chapter entitled “The Relationship between Archaeology and the Bible: Expectations and Reality.”  In it, he questions the conclusions of those who believe that archaeology has disproved the historicity of the Bible’s events.

If archaeological finds seldom impose on the biblical stories, how is it then that some have concluded that those stories are in error, based on the archaeological data?  I would suggest that the logic of [Maxwell] Miller, as exhibited in his comments about et-Tell/Ai, contains within it a subtle acknowledgment of his belief that archaeology can prove the Bible.  Miller’s logic: archaeologists did not find evidence of the biblical events of Ai at et-Tell; therefore, the Bible account has been disproved.  The logic and corollary to this logic would be: the truthfulness of the biblical text has been disproved by archaeology; therefore, it is also possible that archaeology could have proved the truthfulness of the bible.  If this is not so, then the Bible suffers from double indemnity, damned if it does and damned if it does not.  In short, whether Miller and [William] Dever are willing to admit it or not, their acceptance that the Bible has been disproved is evidence that they believe that archaeology can prove the Bible.  Those who think that archaeology has disproved the Bible have used a false concept of what constitutes evidence and have fallen victims to poor assumptions/expectations.

While I cannot go into depth, Merling does a nice job explaining the difficulties of relating texts to artifacts, using the case of Ai (et-Tell) in Joshua 8:28 as a hallmark of the ambiguities.  He is not artificially separating out biblical history from real history, but is rather noting that reconstructing the past using the biblical narratives and archaeology is no simple endeavor.  His point is that people should not be so quick to dismiss the historical reliability of the Bible just because an archaeologist has claimed to have found proof that a given biblical event is wrong.

Towards the end of the chapter, he sums it up nicely:

What archaeology often suggests is that the Sunday School picture of the Bible events might be wrong.  Biblical scholars can be thankful to archaeology that they have been and are continuing to be forced to re-evaluate their interpretation of the text.  An assumed picture of the Israelite conquest on the scale of modern military invasions, against cities the size of New York or Tokyo, must be modified.  Dever rightly called this process of archaeology bringing the Bible to the real world of the past.  On the other hand, disproving any or all of one’s preconceived ideas about the stories of the book of Joshua does not hint at that book’s reliability.

Archaeology cannot determine the trustworthiness of theology or, as again Dever has written, “create or destroy faith.”  De Vaux made the same point this way:  “This spiritual truth can neither be prove nor contradicted, nor can it be confirmed or invalidated by the material discoveries of archaeology.”  It is precisely at this level where those who think archaeology has disproved the Bible live in a Sunday School world.  Where the problem arises is in trying to separate faith from history.  While some believe that is possible, the presence of those who say the Bible has been disproved belies that separation.

In the end, Merling reminds us that we must ask the right questions of archaeology and not expect too much of it.  He suggests that the relationship between the Bible (properly read) and archaeology (properly interpreted) is not static: “Both can help us better understand the other, but neither can, nor should, be used as a critique of the other” (pg. 42).  And while we must not give into the idea that artifacts are completely silent, we must not go too far in believing that they are self-attesting and perspicuous.

1 thought on “Asking the Right Questions of Biblical Archaeology”